Although there was no hackathon at #Dreamforce2015 I was fortunate enough to participate in the next best thing by presenting two sessions at the conference.

One of my talks was on location-aware development on the platform through beacons, specifically using Apple’s iBeacon protocol and estimotes. In the session I discussed how Salesforce CRM data could easily be leveraged in an organization’s mobile app to promote sales and improve their customer experience.

As a demonstration, I showed an iOS app built using the Ionic framework that sends a push notification to a customer as she walks by a storefront, even with the store’s app running in the background. The notification itself contained data pulled directly from an open Salesforce opportunity related to the customer.

Fast forward to the Spring ’16 release and now Salesforce offers automatic geocoding of standard address fields. Using some techniques from a previous blog post on the subject by Salesforce MVP Gorav Seth I decided to update the code behind my demonstration over the weekend.

First, I added two new objects in Salesforce; one to represent the estimote beacons and the other a junction object between contacts and beacons meant to represent check-ins at a given location.

Instead of creating fields on the user object like Gorav had done I decided to instead create a hierarchical custom setting meant to represent an estimote beacon located at the San Diego zoo. I then created a formula field on the Account object very similar to his, which should provide the distance in miles between a given account and the zoo.

Next, I modified the Ionic app from my demo to callout to an updated version of the Apex class being exposed as a custom REST endpoint. This would ensure that in addition to a push notification being sent to the customer a check-in would be created in Salesforce.

Finally, I created a few reports and a dashboard to visualize the data. The first provides insight into how many times each contact checked-in at the particular beacon location (in this case the zoo) and the second shows nearby accounts. 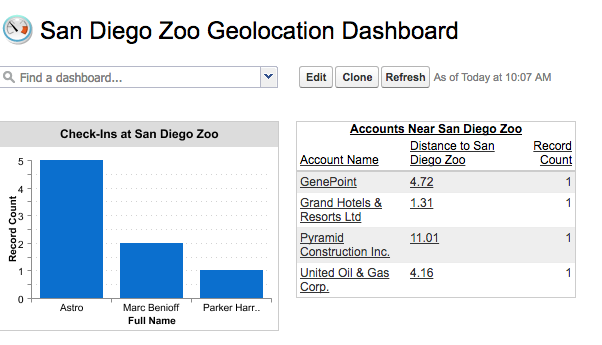 Summarizing this information in a dashboard allows a manager to do some cool analyses very quickly. For example, if she were considering opening a new storefront at the zoo then the dashboard would give an idea of expected foot traffic, provide a geo-targeted list of contacts to run a future campaign against, and show partner accounts that may be interested in advertising to mutual customers at the location.

All source code and metadata is available on GitHub:
Ionic source
Salesforce source/metadata